The size of the global diabetic foot ulcer treatment market is expected to exceed USD 14.8 billion by 2030 at a compound annual growth rate of over 6.22 percent, from an estimated USD 9.13 billion in 2022, according to Canada-based Precedence Research. The rapid urbanization world wide has resulted into sedentary lifestyles and faulty food habits amongst the people. This has resulted into obesity and diabetes among the people belonging to various age groups. 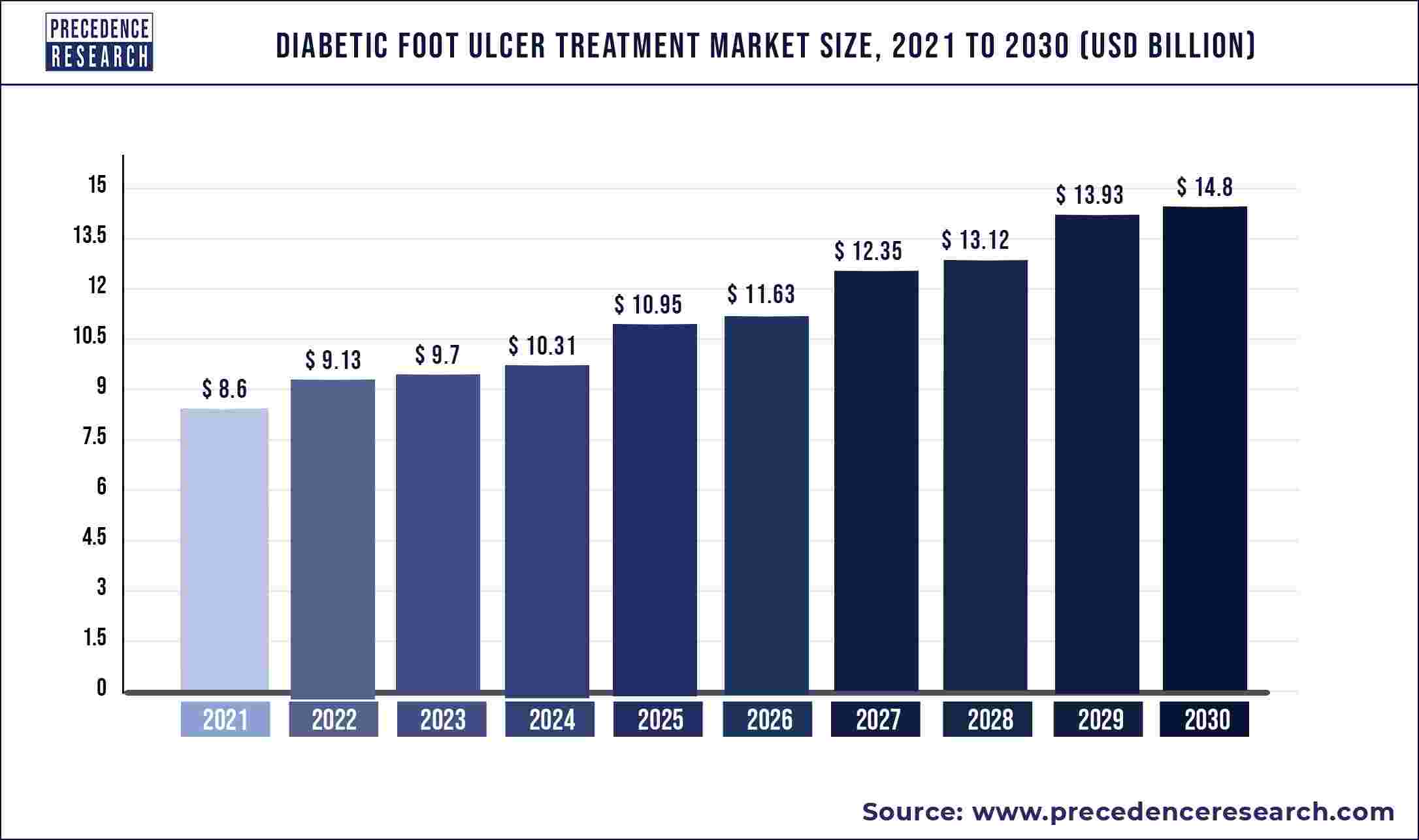 The aim of the diabetic foot ulcer treatment market is to provide the best possible services with the help of advanced medical technology to facilitate faster and better diabetic wound healing process. Diabetes has become one of the most common diseases that people are suffering with globally. As a result of the rapid modernization the food habits of the people have been altered negatively which is further clubbed with a faulty lifestyle. This in turn results in the creation of diabetes and further develops into a diabetic foot ulcer.

A diabetic foot ulcer is very difficult to treat and more difficult to manage as it poses a number of complications in front of the medical fraternity. A proper judgement regarding the condition of the wound is essential as it decides the further course of treatment and prognosis of the case. An improper management of a diabetic foot ulcer leads to a bad prognosis which proves to be fatal for the patient.

The Asia Pacific region is rapidly developing and hence the number of industries and IT companies have increased which results into a sedentary lifestyle of the people. As a result of this, obesity and diabetes have become the most common diseases in this region. The European market has also shown a considerable growth on account of the advanced facilities provided to the people by the hospitals in order to manage diabetic foot ulcers.

The rapid urbanization global has resulted into sedentary lifestyles and faulty food habits amongst the people. This has resulted into obesity and diabetes among the people belonging to various age groups. Not only the geriatric population but also the younger age groups are at a great risk of developing diabetes. Diabetic foot ulcer is a complicated diseases which is a bad prognosis of a case of uncontrolled diabetes.

Lack of physical activity and awareness among the people regarding the causative factors of diabetes have led to the increased prevalence of the disease among the people. These multiple reasons prove to be the driving factors for the growth of the market during the forecast period.

The high cost which is associated with the use of highly advanced medical equipments and medicines in the treatment of diabetic foot ulcer makes it unaffordable for the common man to opt for such procedures. The people belonging to the developing and under developed countries do not have a huge to disposable income in order to spend it on advanced treatment facilities which hamper is the growth of the diabetic foot ulcer treatment market.

The high preference of diabetes among the people belonging to the developed nations has proved to be a great opportunity for the diabetic foot ulcer treatment market. The increasing sedentary habits of the people which is combined with their faulty eating habits hampers the glucose regulations resulting into uncontrolled diabetes. This benefits the growth of the diabetic foot ulcer market which is looked forward to for providing advanced treatment options.

The multiple facilities provided by the hospital sector has boosted the number of people opting for diabetic foot ulcer treatment. These factors have provided multiple opportunities for the market to record a considerable growth during the forecast period.

Lack of skilled labour force in the health care sector has hampered the growth of the market. People are worried regarding their already sensitive condition as a result of uncontrolled diabetes and it’s complications which can be worsened by the absence of a skilled medical staff.

Segments covered in the report.

If you are aiming to enter the global diabetic foot ulcer treatment market, this report is a comprehensive guide that provides crystal clear insights into this niche market. All the major application areas for diabetic foot ulcer treatment are covered in this report and information is given on the important regions of the world where this market is likely to boom during the forecast period of 2022-2030 so that you can plan your strategies to enter this market accordingly.

Surgical Sphincteroplasty Market Size to Record US$ 5.67 billion by 2030

Point of Care Diagnostics Market Size is Forecasted to Reach US$ 93.21 Billion by 2030