The global drug of abuse testing market is anticipated to garner notable gains, registering a CAGR of 6.4% every year, according to a 2022 study by Precedence Research, the Canada-based market Insight Company.

The drug of abuse testing market is surging, with an overall revenue growth expectation of billions of dollars within the next ten years. The market is expected to grow to US$ 10.7 billion by 2030 from US$ 6.14 billion in 2021. The report contains 150+ pages with detailed analysis. 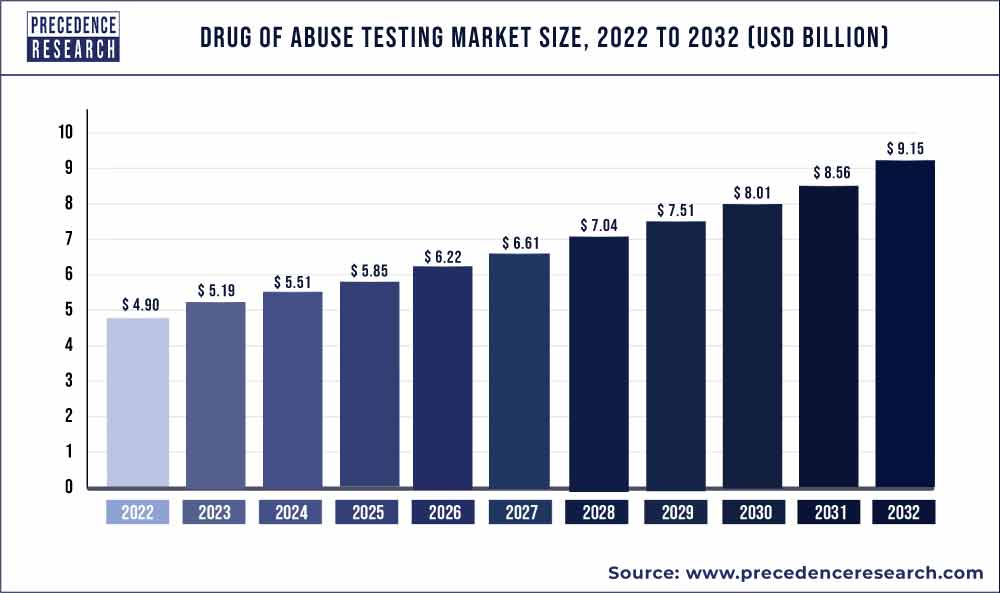 Drug of abuse testing services is used to detect whether an individual consumed any drugs. This test is conducted by testing various sample such as urine, blood, hair, and saliva. The growing consumption of drugs among the population is the primary driver of the global drug of abuse testing market. Further, various government initiatives to control the use of drugs among the youth is exponentially driving the market growth across the globe.

According to the United Nations Office on Drugs and Crime, around 246 million people used illicit drug and the population aged between 15 and 64 years, in 2013.According to UNDOC, around 40% of the global people who inject drugs are infected with HIV. Hence, the rising prevalence of HIV is a major factor that encourages the restriction on drug use, thereby propelling the growth of the global drug of abuse testing market.

North America dominated the global drug of abuse testing market. This is attributed to the highest consumption of drugs such as heroin, cocaine, cannabis, and alcohol in the region. Moreover government initiatives like the implementation Patients and Communities Act to counter the problem of drug abuse is a major factor influencing the growth of the market across the region.

According to the National Survey on Drug Use and Health Report, over 500,000 teenagers in US were suffering from drug use disorders in 2018. Hence the rising use of drugs among the teenagers is a major threat to the national interests that propels the growth of the drug of abuse testing market.Further, the presence of numerous key market players in the region and their strategical developments fueled the growth of the drug of abuse market in this region.

Asia Pacific is expected to be the fastest-growing region. According to the Australian National Council – Asia Pacific Report, Cambodia has become the leading source of cannabis the globe. Major economy like China has taken an initiative to set up a huge network of drug treatment centers across the nation. Around 74.4% of the Hong Kong drug users prefers heroin and around 80% of the HIV cases in Indonesia is directly associated with the injection drug use. The Asia Pacific is becoming a major market for the illicit drug traders due to the failure of government to tackle this situation. Therefore, Asia Pacific has a huge growth potential for the drug of abuse testing market.

Drivers – The market is significantly driven by the demand from the private employers and growing abuse of prescribed drugs. According to the National Institute of Drug Abuse, over 50 million people used prescription drugs such as pain relievers for non-medical purposes. Therefore, growing uses of prescription drugs for non-medical use is boosting the growth of the market.

Restraints – The low awareness, inadequate healthcare infrastructure, and low financial capabilities in underdeveloped and developing regions may hamper the growth of the market. Moreover, inefficiency of the government to tackle drug abuse issues have resulted in the increased consumption of alcohol among the teenagers.

Opportunities – The development of low-cost and disposable testing devices may propel the market growth in the upcoming years. Further, the development on-the-spot testing kits shows rapid and reliable results is expected to gain traction.

Challenges – The high cost of the testing equipment and low penetration of research laboratories in the underdeveloped markets is a major challenge to the drug of abuse market players.