The hydrogen generation market is anticipated to garner notable gains, registering a CAGR of 5.4% every year, according to a 2022 study by Precedence Research, the Canada-based market Insight Company.

The hydrogen generation market is surging, with an overall revenue growth expectation of hundreds of billions of dollars within the next ten years. The market is expected to grow to US$ 219.2 billion by 2030 from US$ 135.94 billion in 2021. The report contains 150+ pages with detailed analysis. 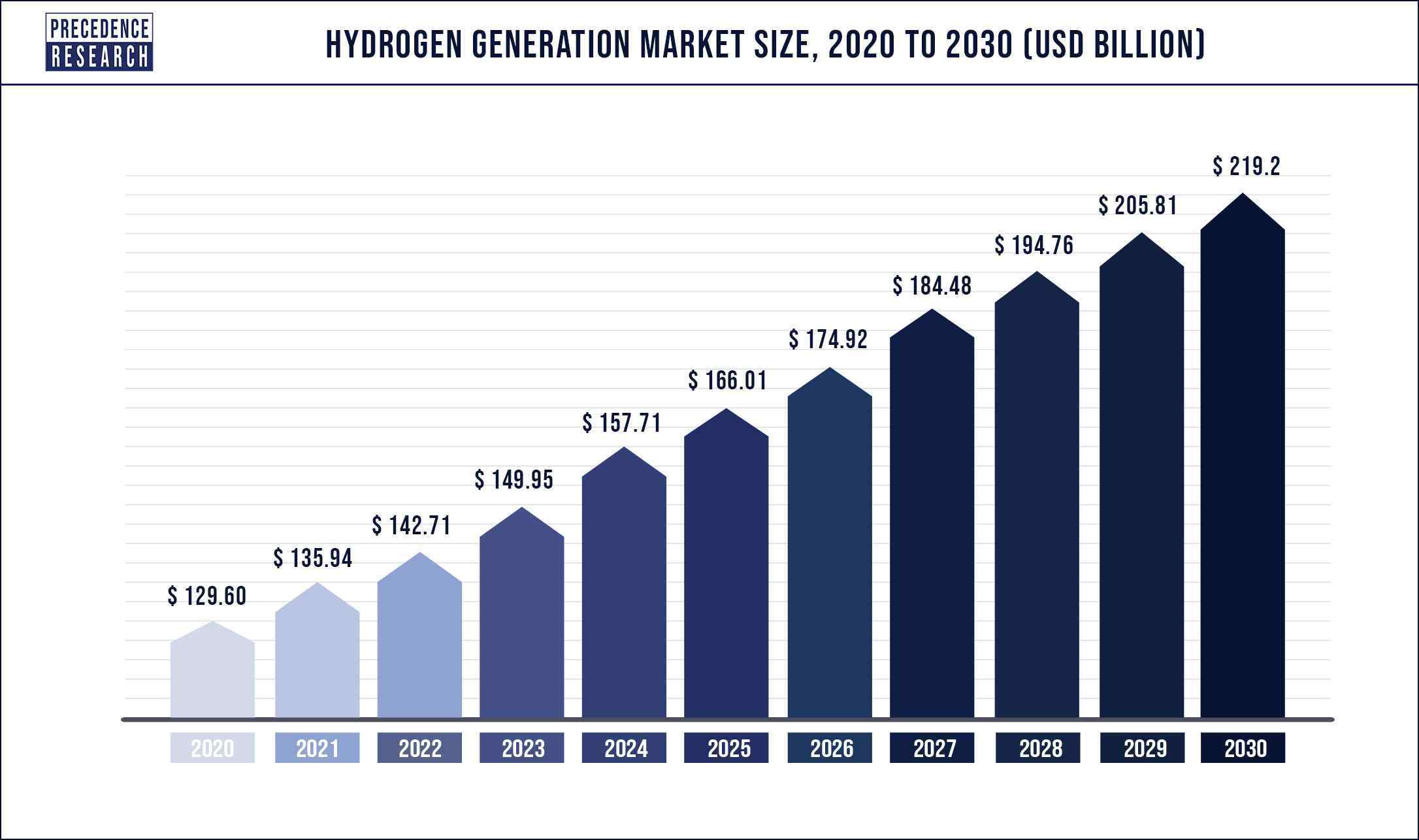 The global hydrogen generation market is driven by the rising awareness regarding the adoption of green and clean energy. The deteriorating environmental conditions owing to the excess economic activities across the globe has resulted in the deterioration of the environmental health. Rising government initiatives to reduce carbon footprint is fostering the adoption of hydrogen to produce energy.

Moreover, rising investments by the top players in the research and development for development of hydrogen using renewable and eco-friendly sources is expected to drive the growth of the global hydrogen generation market. Moreover, rising demand from the fuel cell industry is boosting the demand for the hydrogen. The rising emphasis on the green energy across industries is expected to boost the growth of the hydrogen generation market across the globe.

Asia Pacific is the dominating and the fastest-growing market for hydrogen generation. This is attributed to the rising number of manufacturing plants and development of various industries in the region. The rapid industrialization has fostered the growth of the hydrogen generation market in Asia Pacific. The robust economic development in the nations like Japan, China, and India has exponentially increased the consumption of hydrogen across various industries. The rising government expenditure on building infrastructure for the distribution of various goods and government policies to attract FDIs is expected to foster the industrial development in the region, which in turn is expected to drive the growth of the hydrogen generation market in the region during the forecast period.

Driver – The increased deployment of vehicles operated by the fuel cells is boosting the demand for the hydrogen. The development of fuel cell electric vehicles especially the heavy duty and the passenger vehicles is an attempt to reduce carbon emission from vehicles across the globe is expected to drive the demand for the hydrogen. Moreover, the increased urbanization and industrialization has propelled the nations to develop and adopt green energy for protecting the environment from global warming.

Restraints – High capital investment is associated with the production of hydrogen. Various technologies like electrolysis is very much costly and it also consumes lot of energy while producing hydrogen. This factor may hinder the market growth in the upcoming years.

Challenges – The major challenge associated with the hydrogen generation is the lack of coal. The lack of coal owing to the halt in the mining centers due to heavy rainfall in 2020 has resulted in power cuts in the major economies like China and India.