The medical nonwoven disposables market size is projected to touch over US$ 29.06 billion by 2030, growing at a CAGR of 4.4% every year, according to a 2022 study by Precedence Research, the Canada-based market Insight Company. 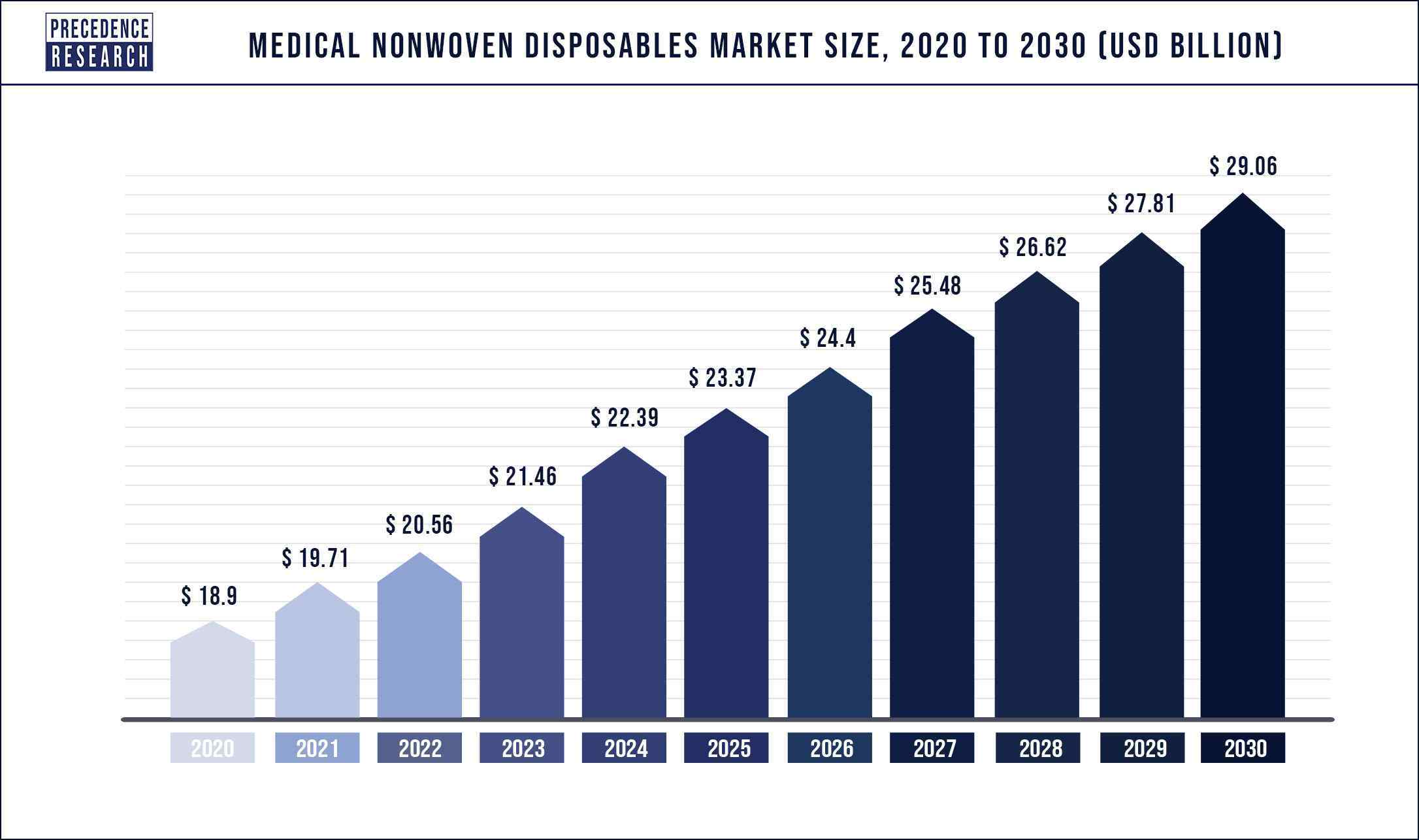 The base year for the study has been considered 2021, the historic year 2017 and 2020, the forecast period considered is from 2022 to 2030. The medical nonwoven disposables market is analyzed on the basis of value (US$ Million), volume (Unit), and price (US$/Unit).

According to the World Health Organization, around 7% of the hospitalized patients in developed countries and 10% of the hospitalized patients in the developing countries acquires at least one hospital acquired infection. The medical nonwoven disposables help the healthcare professionals to stay safe from any contaminations and infections as these nonwoven materials prevent the entry of microorganisms.

Moreover, the manufacturers are continuously engaged in the adoption of the advanced technologies in the production of these nonwoven medical disposables. These factors are expected to drive the growth of the global medical nonwoven disposables market during the forecast period.

North America dominated the global medical nonwoven disposables market in 2020. This is attributed the presence of huge geriatric population in US and the rising prevalence of dementia and urinary incontinence among the old age people. According to the US Census Bureau, the 65 years and older population in US has grown by 34.2% in the past decade and by 3.2% from 2018 to 2019.According to the Urology Care Foundation, around 33 million people in US are suffering from overactive bladder.

Therefore, the increased adoption of the medical nonwoven products like diapers among the old age people has fostered the growth of the market. Moreover, the surging number of patients in the North America owing to the increased prevalence of various chronic diseases has fostered the adoption of the medical nonwoven disposables amongst the healthcare units.

Asia Pacific is estimated to be the most opportunistic market during the forecast period. Asia Pacific is witnessing rapid growth in the geriatric population and increasing birth rates. This is expected to drive the demand for the disposable diapers across the region. According to the United Nations, about 80% of the global geriatric population will be living in the low and middle income countries by 2050. Furthermore, rising female population in the region is expected to drive the demand for the female hygiene products like sanitary pads. Thus, Asia-Pacific is expected to grow at a rapid rate throughout the forecast period.

Environmental degradation due to the disposables

The medical nonwoven disposables may have a negative impact on the environment as a huge amount of wastes are generated across the globe. The proper measures must be taken for disposing such medical disposable materials in order to prevent the contamination. Further, the accumulation of wastes and its disposal impacts the environment negatively.

Some of the prominent players in the global medical nonwoven disposables market include:

Paperboard Packaging Market Hits US$ 206.5 Billion in Market Value By 2030

Medical Implants Market Size is Forecasted to Reach US$ 145.6 billion by 2030

Healthcare Informatics Market is Anticipated to Surpass $100 bn by 2030